To say that the girls were thrilled with the surprise I announced towards the end of our trip to Wales is an understatement. They had been curious about the lack of information for the last two days on our otherwise very detailed itinerary and I kept putting them off by saying we needed flexibility. When they learned that I had tickets booked for the Eurostar train to Paris…well use your imagination. 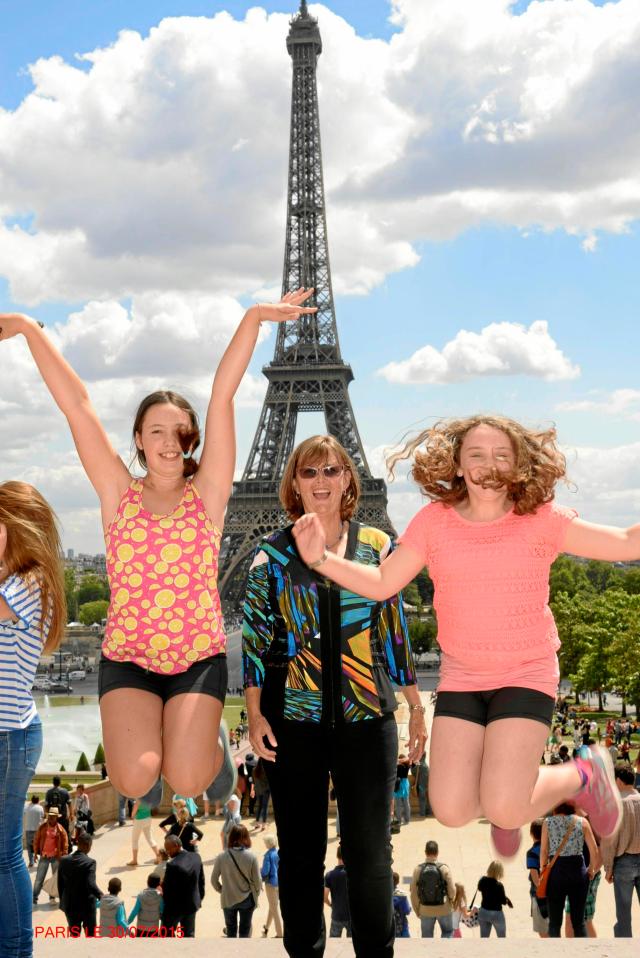 We went up the Eiffel Tower, walked along the Champs Elysees, dined on crepes – covered the whole tourist gamut as best we could. Even down to a portrait on Montmartre. Didn’t my granddaughter do well when asked for a ‘mona lisa’ smile!

Many of us are privileged to take for granted the ease with which we come and go across borders with just the simple act of laying down our passport. As we sped towards the Eurotunnel on our way to Paris for the final part of our trip, the trucks lined up waiting to go through the Chunnel was a poignant reminder that there are too many families who don’t have that privilege. The three of us thought hard about what that meant.

For years desperate families have been making the perilous crossing from North Africa to Europe often drowning at sea. Now here they were trying to get from France to Britain by hitching rides on trucks and the consequences, besides the backups as trucks are searched, are often equally tragic.

Do remember this photo of all the documents I carried?

Well thank goodness for complete files when travelling with grandkids! After passing through 6 sets of border control (leaving Canada, entering UK, leaving UK, entering France, leaving France, entering UK!) that 6th guard finally asked the right questions! Who are these children to you, where are their parents and do you have permission forms to be travelling across borders with them? Not only did I have every possible form but, thanks to my ever efficient daughter-in-law, they were notarized by an oath commissioner with a major police force!

As our vacation came to a close my grand daughters and I discussed all those less fortunate families, without official papers but lots of dreams for better futures. There but for the luck of our birthplace go we….