What else we did yesterday on Cheryl’s birthday!

Hola again. We had to quit our description of yesterday’s activities before we had finished describing our day. It was midnight and we were about to sue ‘wordpress’ for losing our blog a number of times. We did also visit the magical Park Guel and wandered around in the sparkling sunshine. Set on a hillside with all of Barcelona and the Mediterranean spread out before it this is where Gaudi attempted to create a whole new way of building a community. He didn’t get far before the Sagrada Familia project became his obsession but the strange fairytale houses and paths, benches and bridges he built and the colors he used makes disney look boring! There were lots of young people there – perhaps on school trips – and we had a great time.

We then walked downhill through great neighbourhoods towards the Sagrada Familia. As we’ve walked around this great city we’ve been so impressed with how many parks, playgrounds, dog parks, bike lanes, pedestrian malls there are…how extremely pedestrian friendly it is here. They have a new LRT system that Toronto’s mayor should see! 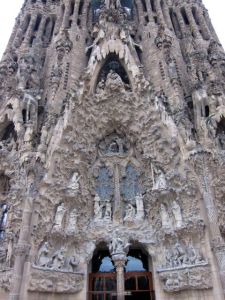 Guadi’s obsession – the most unchurchlike La Sagrada Familia – described as a testament to his ‘art of the impossible’ vision. A zealot who worked on it for 40 years and since he died in 1926 it has been through civil war, world war and dictatorship and for the foreseeable future will remain under a forest of cranes with hopes of completion by 2026. It’s the finest example of modernism with it’s forest of columns inside, Jesus appearing to ‘hang glide’, the spires topped by sparkling fruit the never ending scenes carved into every space (note this photo of above the door!), the facades appearing in places to melt like a candle, the choir loft that holds 1000 (oh to hear those arias in this space)…we spent over an hour and 1/2 there and could have stayed so much more. There is a little school with wavy walls he had built outside for the workers kids and insisted on girls attending. So many more stories we want to know about this strange architect.

To finish the evening and bring Cheryl’s birthday to a close we went to a local restaurant for   a meal…the tables around us filled up as the clock approached 9pm and the Barcelona vs Granada game was about to start. Stay tuned for our next report on rainy street scenes, bustling markets and the concert we are off to now – Mozart’s Requiem at the Basilica de Santa Maria del Mar.