This was our last day of visiting Barcelona and was the first time we actually set an alarm to make sure we didn’t miss a minute. We headed off  on a tour bus in glorious sunshine to the fabled benedictine monastery of Montserrat. Once again we chose the tour alternative even though many reject this alternative as too touristy…we thought given our limited time we’d do it anyway. We found the winding road up the mountain exhilarating especially sitting on the mountain side seats so we didn’t have to look down the sheer cliffs.

The monastery complex with its cathedral, monks cells, hotel for visitors, cable cars and locally produced food products was really tastefully done. Surrounded by strangely shaped rock formations and walking paths and gardens it was a place you could easily spend a full day exploring. However, here the failings of joining a bus tour show up since we had under two hours to spend in this other-worldly place.

The facade on the church was amazing with a huge scene of Christ and his disciples…since it was Sunday there was mass being heard in the Cathedral and their famous boys choir was participating. You could hear their high clear voices during the hymns. The cathedral was resplendent although one could also say rococo as the following details might show: 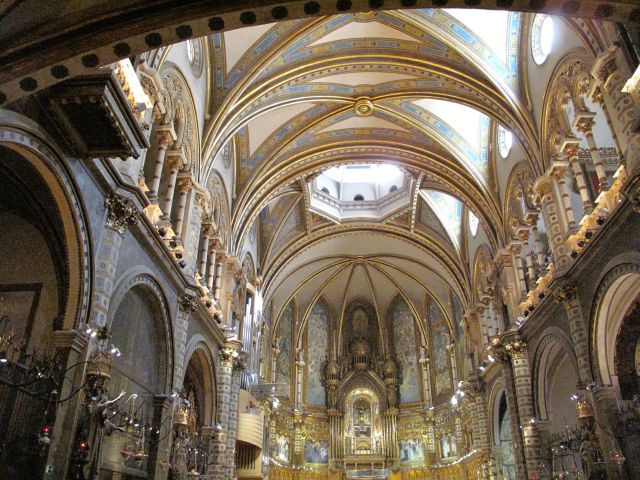 And then to get a little closer so we can see the details even better:

Before we left, we both sampled the Monserrat liqueurs and believe that they were quite delicious …although it was a little difficult to discern after the fourth. Along the bridge to the monastery local vendors had set up stalls to sell their local honey’s, cheeses and cakes and Cheryl was very keen on buying some of the cheeses until Carol scared her by reminding her how good the customs dog is at sniffing it out!  It didn’t stop her however from sampling enough along the bridge to make a lunch of it.

We returned to Barcelona with the sun shining and streets filled with families out enjoying the day, so we joined them. As you walk along any street you come across lovely architectural details – not all as grand as Gaudi’s but some as simple as this:

Or a the public mailboxes, many of which look like this:

We walked through the oasis of Parc de la Ciutadella and watched families playing, picnicing, bike riding and paddling boats in the strangely emerald coloured but beautiful lake at its centre.

Then we joined the crowds and headed for the beach neighbourhood of Barceloneta with its narrow streets, cafe’s, beaches and boats. We sat at a patio enjoying the extra hour of sunlight (since the time had changed the night before), people watched  and toasted Carol’s birthday. Walking along the beach we picked up shells, smooth coloured glass, pebbles and admired a Frank Gehry sculpture in the distance. this is the world as it should be – peaceful and full of happy families.

To bring to a close a perfect last day before we headed back to the hotel to pack our bags we visited the chocolate extravaganza – Vioko chocolate shop. We would have taken a photo but our fingers were much too sticky! Well that’s it for Barcelona…Cheryl and Carol hope you enjoyed following along and that you were able to pick up an inkling of just how much we loved this place…Adios Barcelona and hasta la proxima!!

7 Responses to Montserrat and Barceloneta